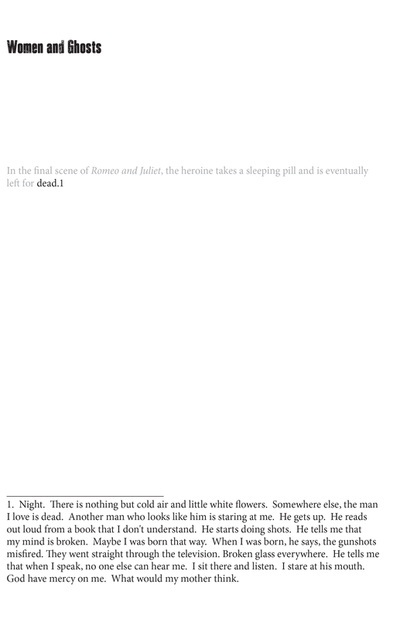 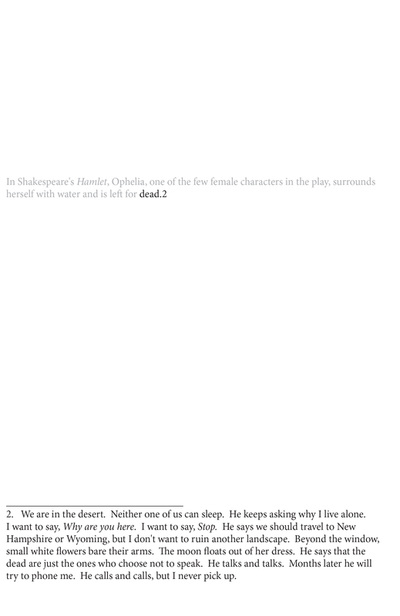 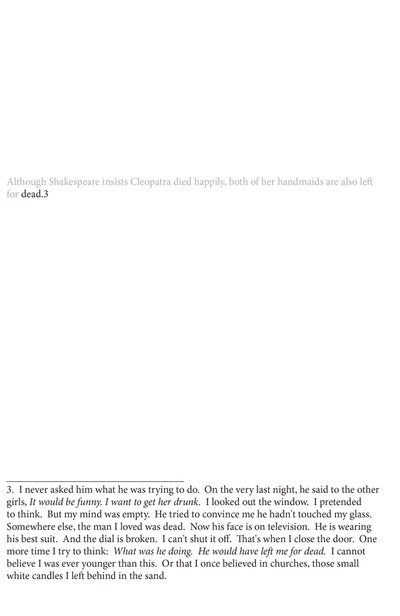 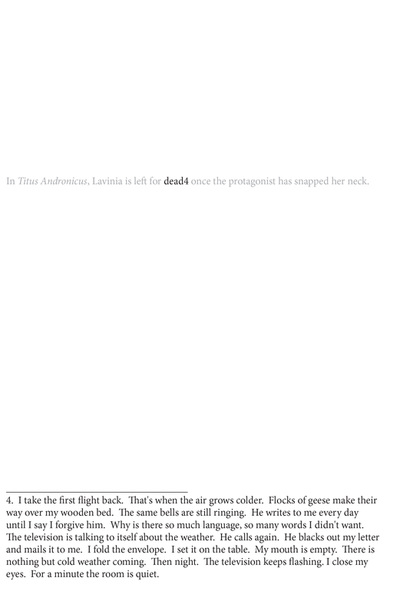 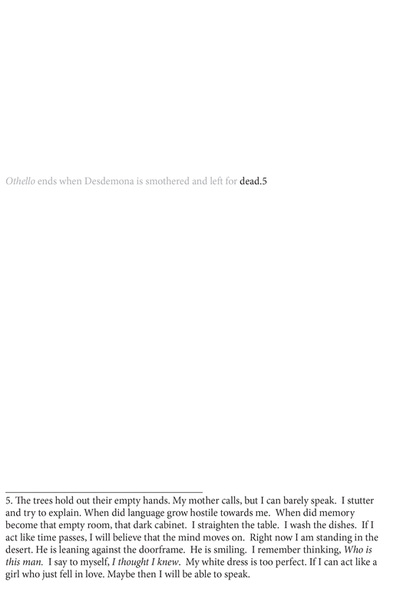 There is too much beauty in the world. That morning, I stared out at endless mountains, thinking that the landscape would never look the way I felt as I moved through it.

I had traveled one thousand and thirty two miles to see a man I barely knew. We met briefly the year before in a small, eastern city known for its horses.

When I saw him again, nothing glittered or swooned. Something was off with the weight of his mouth. I wanted to say this, but I could barely speak.

When one speaks, how does one begin? Most would say arithmetic is the simplest place to start. One window, two cracked plates, an empty glass. It is indeed virtuous to claim objectivity. No one wants to be misled by rhetoric, or worse, affect.

The young woman shouting in the corridor is promptly escorted out by security. The mathematician parts his lips. He clears his throat to speak.

When he told me I was lonely, I tried to forget.

He would remind me of the weather: You must feel terribly alone.

One night he told me about himself: I imagine you must feel different from the people who aren’t lonely.

I felt my bones crack open, but I couldn’t see the light coming through.

*
Some nights I sleep with my dress on. My teeth
are small and even…

Most of us find a way to speak eventually.

The same young woman is shouting again in the same corridor. Her hair covers her eyes. The guards twist her statements into questions: You wouldn’t what. What is the name of the gentleman. What are you doing.

But where does this courage come from?

In poetry, one doesn’t speak, but rather, one is spoken through. Homer’s The Odyssey begins with an invocation to the muses. He is merely their instrument, an opening through which the white thread is unspooled.

Jack Spicer didn’t believe in muses, but he did believe in martians. His poems were radio transmissions from other worlds, incessantly crackling in languages and voices other than his own.

C.D. Wright offered herself as a conduit, allowing those who are voiceless speak through her.

In Tribute to Freud, H.D. writes that it is the unconscious mind that speaks through the poet. Memory is a locked box, and poetry the little silver key.

Night. The same pristine field. I want to use language so badly, but I don’t know how.

I was old enough
to know love is blind as the old woman
pulled down the hall by her dog.
Their guns leaned against the wall
but men in those days kept themselves armed
in the dark and rain.
I thought of a burning bush.
And so the domestic objects, debris, and violence of the world around us crystallize in the mind. They are distilled into a single image, which goes up in flames.

So what are we left with?

I look down at my feet. All that’s left is an old radio, a broken shot glass. The walk upstairs begins slowly. The smallest step is always the one covered in ice.

He would look out at the water, watching the rain fall. He always held his phone as though it were a small child.

This is the only reason I travel, he said. To have an affair.

I had left the room to change into a bathing suit. But what does it mean to be present.

I felt a numbness in my fingertips, and when I placed my hand in his, the warmth was gone.

Violence doesn’t always involve the physical body. He told me I was alone because I was lonely. Stop it, he said, and you’ll meet someone else.

I pretended I didn’t know about his wife.

How many times did I cross a threshold?

One morning the rain wouldn’t stop. The mail came later than it usually did. He had sent back the poem I wrote for him in a white envelope.

To be loved is remarkable and rare. To be voiceless is fairly commonplace.

When violence does involve the physical body, it is often in the naming of it.

For weeks I chose silence, not wanting to harm what seemed like a delicate man. I stood in the garden, watching lilies open their perfect mouths.

I believe you are misunderstanding me…

There is too much beauty in the world.

So I begin gathering my things to go. My white dress a hothouse flower fading in the tremendous heat.

How does one re-enter language?

In Black Sun, Julia Kristeva describes mourning as a loss of language. Words no longer correspond to things in the world: a coffee cup, a broken latch, a small printed receipt from the airline ticket counter.

We reenter language by taking it apart. By dismantling it, piece by piece.

When we see the bones crack open, we also the light coming through.

How many threads have I broken with my teeth. How many times
have I looked at the stars and felt ill…

Throughout Steal Away, C.D. Wright inhabits the voices of others, even those we might deem glaringly insignificant.

It is through the juxtaposition of voices, texts, and types of language that she creates friction.

I had always wondered what the simple act of striking sparks could do. For instance, can the light be caught in a jar. Could it be made to power a blow-dryer. Will the sparks ever be visible outside this body, these rooms.

Heat has been known to generate fires. For C.D. Wright, it is the spark of one voice against another that allows her words to shine through more clearly.

Voices often exist in contrast with one another. It is for this reason that the jeweler places the diamond against black velvet. He takes his measurements and leaves in silence.

In the deserts of New Mexico, heat abounds, and so does fire. I place the dead flowers on the pile of brush. I open my mouth to speak.


--
Kristina Marie Darling is the author of over twenty collections of poetry and hybrid prose, which include VOW and SCORCHED ALTAR: SELECTED POEMS & STORIES 2007-2014. Her awards include fellowships from Yaddo, the Ucross Foundation, and the Helene Wurlitzer Foundation, as well as grants from the Kittredge Fund, the Elizabeth George Foundation, and the Rockefeller Foundation Archive Center. She was recently selected as a Visiting Artist at the American Academy in Rome.